Flip is a crucial part for our internal communication

daily time saving at the bulletin board 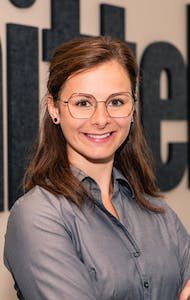 "The App is so intuitive and easy to use that Flip was used immediately. We think it's an important step in our increasingly digital internal communications strategy."

Flip is a crucial part for our internal communication

EDEKA Südwest has already been using Flip in personnel development for internal communication with dual students since 2018. Until now, access to internal communication offers during the theory phases at the universities was often associated with hurdles. When the Corona crisis hit, for example, and organizational changes had to be made, the students could now all be reached easily with the help of Flip, and they were quickly informed about the next steps throughout the pandemic.

The app is thus a suitable supplement to the classic channels that are often heavily used in retail, such as the bulletin board or direct communication with superiors. In the meantime, EDEKA Südwest also uses Flip with its trainees as well as a seminar group in the area of further education. Edeka Südwest is convinced by the simple integration and usability of the app.

EDEKA Südwest, headquartered in Offenburg, is the second largest of seven EDEKA regional companies in Germany. With around 1,200 stores, most of them operated by independent retailers, EDEKA Südwest has a nationwide presence in the southwest. The group of companies, including independent retailers, is one of the largest employers and trainers in the region with around 44,000 employees and around 2,850 trainees in more than 30 trades and dual courses of study.